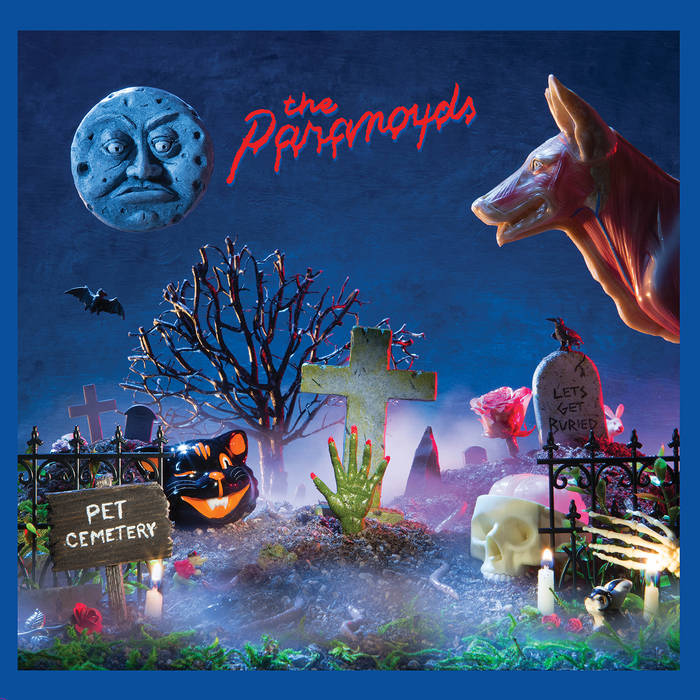 jae jupiter just listened to this for the first time in a while, love it so much u guys are amazing
Favorite track: Hotel Celebrity.

As the world continues to literally burn, The Paranoyds return with a much-needed dose of musical levity. It’s been nearly a year since the Los Angeles-based outfit released Carnage Bargain, their debut full-length, and this new release, a two-song seven-inch, is a total embodiment of their every influence.

Their identity — a band, fueled by campy horror movies and garage rock — is more evident than ever on this seven-inch, beginning with the organ-fueled opening of A-side “Pet Cemetery.” Featuring the sounds of off-kilter keys alongside a chugging guitar line, and expansive experiments, “Pet Cemetery” has become a staple of the band’s live performances, resulting in a sea of zombie-fied headbang every time it’s played.

Despite the obvious heaviness that surrounds a track entirely centered on undead lovers partaking in PDA, there’s an undeniable undercurrent of fun. Previously recorded during sessions for the band’s full length-debut, this unofficial anthem for underworld romance was being saved for a special moment.

On the record’s B-side is “Hotel Celebrity,” a single that’s darkness isn’t quite so overt. An examination of aging, and the fruitless celebrity pursuit of superficial perfection, The Paranoyds share in a not so sincere toast to Hollywood.

The single was among the last sessions at the famed Tiny Telephone, a San Francisco-based recording studio. The track is a sneak peek at the future, if there is a future beyond all this shit, of what musical direction The Paranoyds might be headed in next.

Suicide Squeeze Records is proud to release the Pet Cemetery EP on a limited-edition, one-time pressing of 750 copies on coke bottle clear vinyl on November 27, 2020.